Ein Unternehmen derRHÖN-KLINIKUM AG
English
A A A

The HIF/PHD/FIH System in Tumor Biology

Regions of low oxygen tension are common findings in malignant tumors, being associated with increased frequency of tumor invasion and metastasis, and thus critically determining the clinical behaviour of tumors. Indeed, the ability to initiate homeostatic responses and adapt to hypoxia, e.g. by induction of angiogenesis, represents a central driving force in solid tumor growth, crucially governed by the key transcriptional regulators HIF-1alpha and HIF-2alpha (Fig. 1). 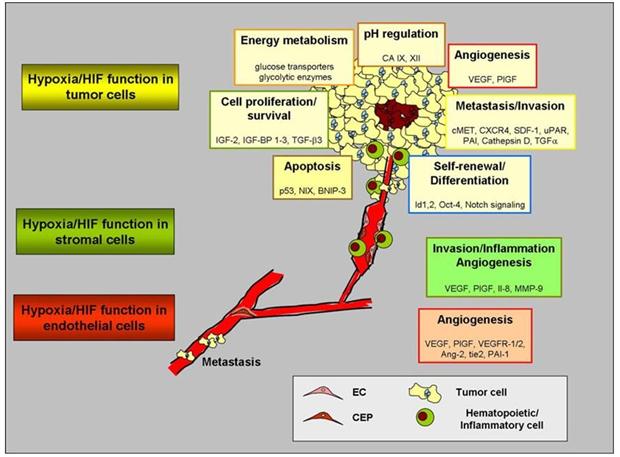 Tumor growth and vascularization are inherently dependent on an intricate molecular and cellular crosstalk within the tumor microenvironment. Interestingly, apart from endothelial and perivascular cells tumors attract a number of cell types including inflammatory/hematopoietic cells and circulating endothelial precursor (CEP) cells. These synergistically act to augment vascularization of the tumor. Current studies indicate that tumor hypoxia and HIF not only indirectly influences these cell types by tumor cell specific upregulation of various secreted, paracrine acting factors but may in addition have direct cell-intrinsic effects (Fig. 1).

Our research focuses on glioblastomas, rapidly growing tumors with large hypoxic areas that are prone to necrotize. Hypoxia is a potent stimulator of HIF-1/2alpha in glioblastoma cell lines in vitro. Consistently, in vivo high levels of HIF-1/2alpha can be detected in cells just adjacent to necrosis overlapping with areas of HIF target gene upregulation such as VEGF (Fig. 2). 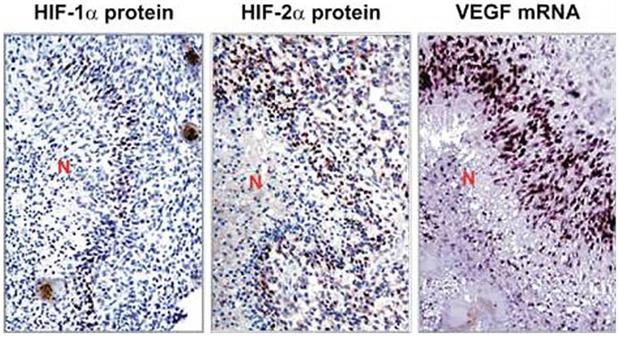 Interestingly, however, the HIF pathway is known to encompass both tumor growth promoting and inhibiting effects. As we could show, the choice between these opposite responses critically depends on HIF protein levels. Thus, high-level HIF expression induces a qualitative switch in the cellular response towards tumor-suppressive actions. As HIF activity is tightly controlled by PHD and FIH function, PHD/FIH may be critical factors in setting the balance between the various responses of the HIF system. We are interested in further characterizing the role of the HIF/PHD/FIH system in regulating crucial pathophysiolocial components in tumor biology such as angiogenesis, glucose metabolism, invasion and apoptosis, using tetracycline-inducible expression and knock-down techniques.